The mission of the Danville Police Department is to provide quality service to the community through a process of continuous improvement. We will maintain a safe environment for all by protecting life, liberty and property through partnerships with citizens and businesses.

The patch of the Danville Police Department is divided into four quadrants representing the four cornerstones of Danville's economy.

The top quadrant depicts the textile industry that dominated Danville for over 50 years. The right quadrant depicts the higher education opportunities available in Danville. Danville's reputation as the hub of the region's tobacco industry is represented in the bottom quadrant. The confluence of roads, railroads, and air traffic in the left quadrant symbolizes Danville's status for over 200 years as the "Gateway to the South."

The Danville Police Department takes pride in its responsibility to protect and serve our community. In 2013, a flag, which is a traditional symbol for law enforcement agencies, was developed for the Department. Corporal Jamie High led the design of the new department flag which will be proudly displayed in the police department and carried by our Honor Guard. 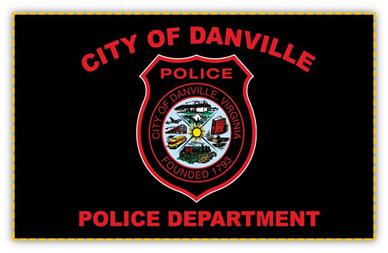 The design that was chosen used the full color Danville Police Department uniform patch as a centerpiece on a black field trimmed in gold fringe with "City of Danville" across the top and "Police Department" on the bottom.

In 2013, Sergeant Keith Thompson led the design of a new department challenge coin, which in recent years has become a strong tradition among law enforcement agencies. Challenge coins are often exchanged between members of law enforcement agencies as a symbol of pride in the organization and unity with fellow officers. Each side of the coin features one of the two primary identifying insignia of a Danville Police Officer- the badge and uniform patch. The badge-side of the coin features our motto Deeds Not Words along the top edge and the statements Respect, Integrity, Dedication, and along the bottom.